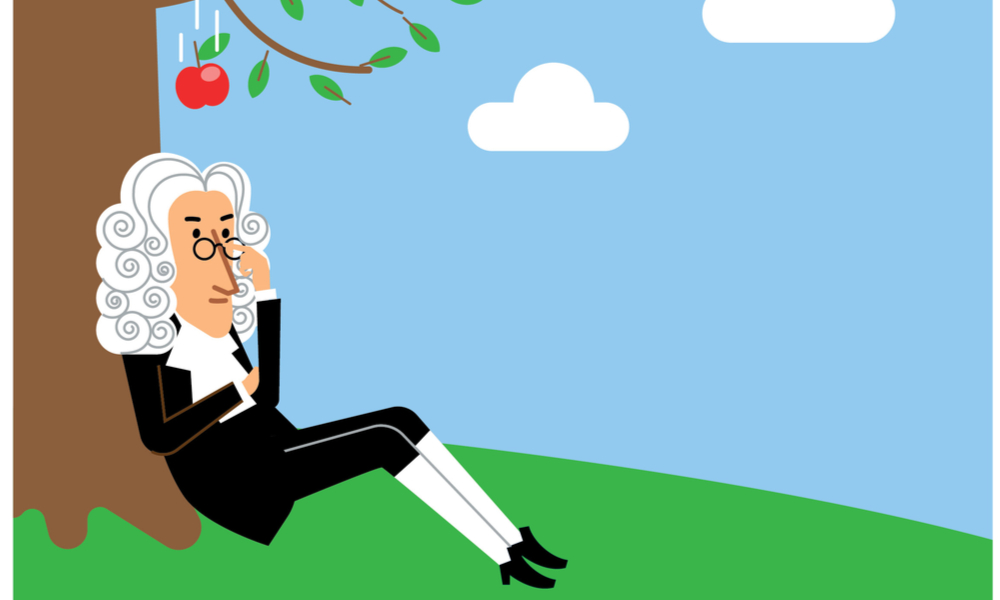 Alchemist. Scourge of evil. Titan of science. How could one person possibly be all three? Well, that’s how it is when you’re Sir Isaac Newton (1643-1727).

In the arena of science, Newton is as renowned as names get. His world-changing Philosophiae Naturalis Principia Mathematica, first printed in 1687, presented Newton’s famous laws of motion and of universal gravitation. His work provided the foundation upon which modern physics stands, and ranks among the most important books in science history.

But the Principia was by no means Newton’s only effort. He also contributed seminal work in the fields of optics and calculus, plus a great deal more. And by “more,” we mean some pretty weird and astonishing stuff. For example:

Newton’s tireless mind wasn’t content to restrict itself to hard science. He also studied and performed extensive experiments in the field of alchemy, a branch of pseudoscience whose practitioners sought to transmute base metals into precious gold or silver, among much else. Surviving papers indicate Newton even had a recipe for the philosophers’ stone, the holy grail of alchemy. This substance was deemed essential for changing lead to gold, curing all manner of diseases, and unlocking the secrets of immortality itself. Alas, none of these alchemical efforts panned out for Newton. It was his true scientific work that ultimately won him immortality of a different kind.

He Nearly Gave Himself a Lobotomy

Like many scientists throughout history, Newton had no qualms about testing ideas on himself. As part of his studies on optics as a young man, Newton thought it necessary to see how the shape of the human eye affected perception of color. So, he inserted a bodkin — a type of large, blunt needle — in between his eyelid and eyeball. Then he moved the bodkin around and used it to exert pressure on the eyeball. If you’re still reading after that grisly detail, you’ll be relieved to know the exercise produced visions of colored circles, but otherwise appeared to do Newton no lasting harm. Still, an ill-timed sneeze could have changed the history of science as we know it.

He Almost Went Blind Staring at the Sun

When a blunt needle wasn’t handy, Newton’s continued ocular abuse included staring at the sun — more specifically, at a mirror positioned to reflect the sun’s light at him while he stood in an otherwise darkened room (so that his pupils would be fully dilated). As any 5-year-old today could tell you, to view the sun with the naked eye is to risk permanent damage, even blindness. But Newton lucked out again. Despite performing this experiment multiple times, Newton suffered only short-term misery, which included several days of seeing really bright spots and hiding in a dark room until he recovered. But these and other observations informed Newton’s research in optics and his theory of light and culminated in the 1704 publication of another of Newton’s great and influential works, the appropriately titled Optiks.

He Struck Terror in the Hearts of Criminals

With the Principia published and his legacy secure as one of the greatest scientific minds of all time, Newton made an unexpected career change in 1696: He accepted an appointment as warden (and later master) of the Royal Mint, which was responsible for making England’s hard currency. Newton served the Mint until his death and took his duties very seriously, particularly when it came to counterfeiters, which he pursued with the kind of zeal that makes Batman look like a boy scout. Despite his advancing years, Newton showed tremendous personal initiative bringing evildoers to justice. He infiltrated the underworld; personally cross-examined hundreds of suspects and witnesses; and almost single-handedly secured the conviction of more than two dozen counterfeiters. Forging currency carried the death penalty at that time, and Newton was merciless in seeing perpetrators prosecuted to the fullest extent of the law. Not all heroes wear capes, it seems (instead, Newton appeared to be fond of floor-length coats).

If you remember nothing else from school lessons about Newton, you probably recall learning that Newton’s “Eureka!” moment regarding gravity arrived while he was sitting under an apple tree. Legend has it that a falling apple struck Newton on the head, causing him to wonder why the apple would fall to Earth and not in some other direction. The labor of this fruit, as it were, eventually led to the ideas later expounded in Newton’s Principia. Although sometimes dismissed as fictitious, a version of this event may have actually happened. In his 1752 biography, Memoirs of Sir Isaac Newton’s Life, William Stukeley recounted the story as told by Newton himself. In this version, the apple didn’t necessarily hit Newton; he merely observed it falling to the ground. But thankfully for posterity and for science, the gravity of the moment was not lost on Newton nor his biographer.